Sorry, you need to enable JavaScript to visit this website.
Saunders College of Business
News
/

Three RIT Tigers from the media arts and technology program received a Gold Leaf Award from the Foil & Specialty Effects Association (FSEA) in May 2019. The team and its client, Print Panther, received first prize for the “Best Use of Foil/Embossing – Self Promotion (Holiday)” category for a design they created in their team project media arts and technology (MAAT) senior class. 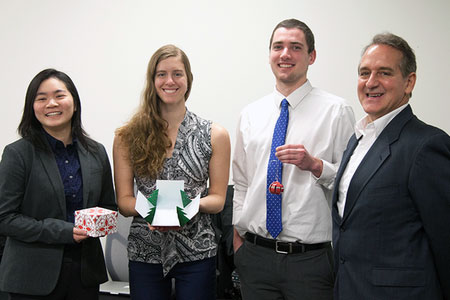 “Senior level students in this program are required to complete a team project in which they exercise skills learned throughout their studies,” said visiting professor Christopher Bondy from the School of Media Sciences and College of Art and Design. “The unique blend of theory and practical, real-world and hands-on application is a great experience that emulates exactly what they will be doing once they graduate.”

Bondy has taught this class for five years and has helped students make connections with several different companies, including Kodak, Xerox, Cohber Press and more. For the Fall 2019 project, Bondy wanted students to experience working Print Panther, and their partners KonicaMinolta and MGI, due to their high quality “digital print embellishment” abilities.

For this collaborative project, called “More than a Box,” students worked with the company to create a package that allowed Print Panther to display the printing applications of its latest press while providing a holiday gift for its current clients.

Pflanz, one of the illustrators on the student MAAT team, mainly worked on drawing and designing the interior of the holiday box. In addition to helping him get into the spirit of the holidays, Pflanz was also pleased with having another experience working with a client under his belt before graduating.

“The fact that we were able to work with a company outside of RIT was great because the project felt bigger than just a typical project for school. I wanted to satisfy the client; it felt like a job,” said Pflanz. “Going from describing something in text and being able to deliver something that fulfilled the client’s requirements was awesome.”

This connection was beneficial for both parties involved. Print Panther was eager to work with these students who, according to Print Panther President Christine Yardley, are the “future of our business.”

Yardley said she knew from the moment she held the design in her hands that it had potential to win a Gold Leaf Award and decided to submit the design for consideration. When she traveled to Atlanta for the annual FSEA Gold Leaf Award Competition and found out they won first place in their category, she was so proud that she cried.

“Working with students is inspiring and hugely gratifying. It is wonderful to see so much creativity, energy and professionalism,” said Yardley. “I had no expectations going in, and I have to say I was pleasantly surprised. It was refreshing and inspiring, I would hire any of them in a heartbeat.”