Prague. The beautiful capital of the Czech Republic and 14th largest city in the EU has been an attractive city to me for some time. Anywhere I travel I find it possible to be exposed to stimuli that push the boundaries of my imagination leading to inspiration. A view of a city so vast truly serves as that stimuli, it fuels my creative imagination to travel even more. The city feels spacious for lack of a better word, it has an ability to flaunt its beauty without ever feeling too overwhelming. Prague is a city of views and it gave me that feeling which can only be phrased as, "Why did I book a plane ticket home?" 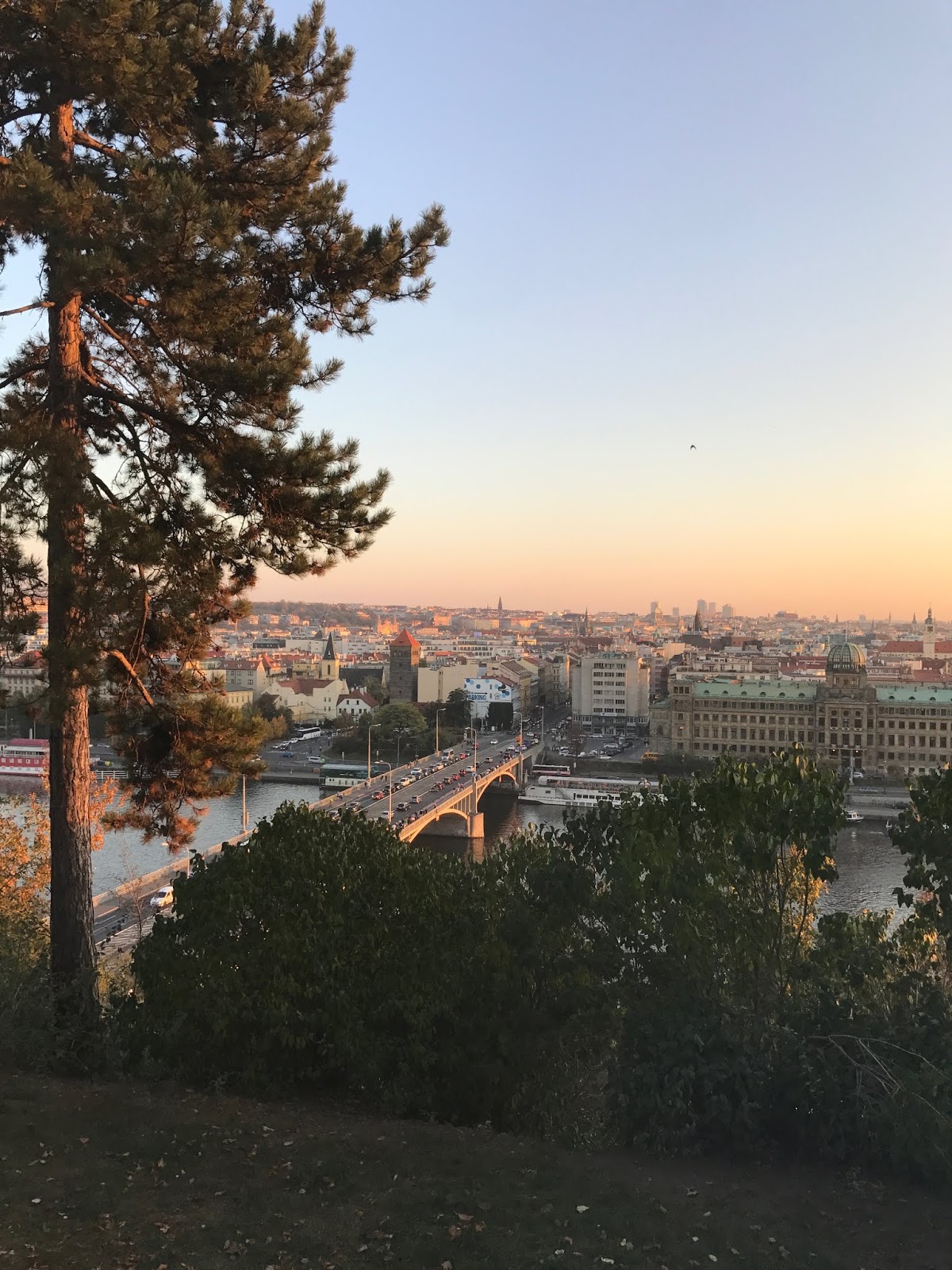 It is a city with numerous attractions, significant culture, and even integrated nature that can alleviate the concrete jungle feeling often experienced when traveling to metropolitan destinations. The historic heartbeat of Prague is the Old Town and its square which dates back to the early 13th century. The first bridge in Prague was actually constructed in the late 12th century, crossing the Vltava River which adds an immense amount of life to the city.

One of the main attractions in Prague often highlighted is Charles Bridge, a footbridge crossing the Vltava River lined with statues of 30 catholic saints. Charles bridge is an engaging piece of art, originally designed as the one bridge in Prague connecting the Old Town to the Prague Castle. It has ties to gothic structural designs and also consists of bridge towers on either end. The towers have lookout terraces at the top for only 3 euro, revealing a stunning view of the rooftops of Prague. The Lesser Town side of the bridge, same side as the Prague Castle, has a bridge tower with the best view. Visit that side if you get the chance, and even though the steps quickly become absurdly steep, it's worth the cardio. You’re probably hungry? The food and its surrounding culture makes Prague equally tasty as it is beautiful. A typical Czech cuisine is called Goulash which you can find just about everywhere. It's a thick stew that can be served with varying meats and spices. Goulash actually traces incredibly far back to the 9th century, as it was a meal found in Hungary, eaten by shepherds. I recommend the duck if you stumble into a Czech restaurant, it's cooked well and the dark meat gives great flavor when combined with paprika. 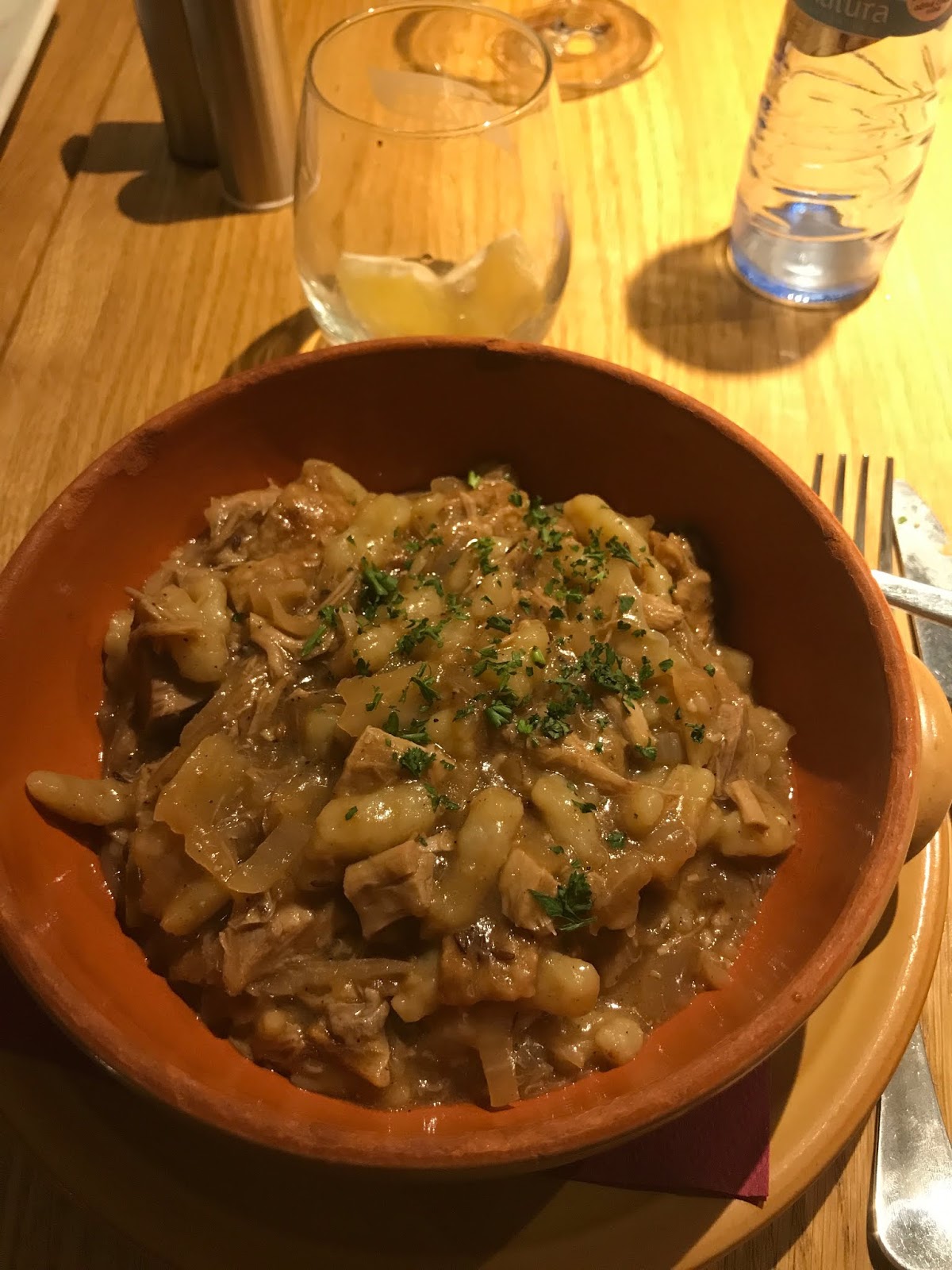 For beer lovers like me, Prague is known for its Pilsner Urquell which was the first Pilsner in the world. Crazy right? It's a golden lager, one of my favorites so far here in Europe. Prague is also home to the Budvar Budweiser beer, the real kind. The real deal. The brewery there is a big attraction as well, doing the tour would be awesome but I never had time! Did you know the Czech Republic also has the highest beer consumption per capita in the world? Yeah easy there tiger, let me finish before you book that plane ticket. Other foods Prague has a name for is a pastry called Trdelnik, which is a circular variation of a split cake. It’s a dessert that is sold on every street corner, usually served with a filling, mainly ice cream or a chocolate Nutella. Satisfy your sweet tooth :)

After eating, some of the best places to go are the parks and hills surrounding Prague. On the northern side of the city you can find Letna Park, and on the western side near Lesser Town is Petrin Hill. Both parks rise quickly above the city, and an uphill stroll in the park provides your eyes with a view that will make you fall in love with Prague. I recommend Letna Park around late afternoon, towards the evening because there is a beer garden at the top of the park with Prague on display beneath you. Angelic. Catch the sunset there while having a beer. It's peaceful to say the least. On the way to the beer garden, the walk through the park has places along the path that give you sneak peaks of the city through the trees, demonstrating its elegance. I found it best to enter Letna Park where the Cech Bridge meets the Park and walk my way up from there. You'll enjoy it. 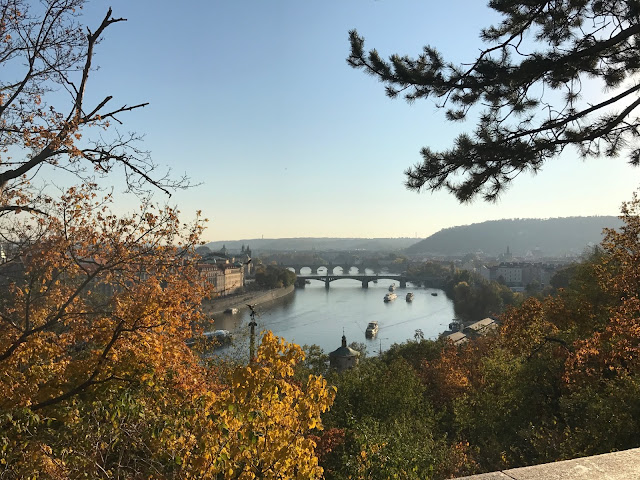 Petrin Hill was much larger than I originally anticipated, so I spent an afternoon walking through Petrin Park to the top where you can find Petrin Tower. There’s two options when heading to Petrin Tower. You can walk the winding pathways to the top which gradually offer broader and more encapsulating views as you slowly rise above the city. It's simply stimulating because you can see so much of the city, and then realize you’re only a quarter of the way up the hill. It adds an energy to your step. The other option is taking the funicular that is essentially a tram to take you to the top of the hill and has stops along the way. You know me right? Walk it. 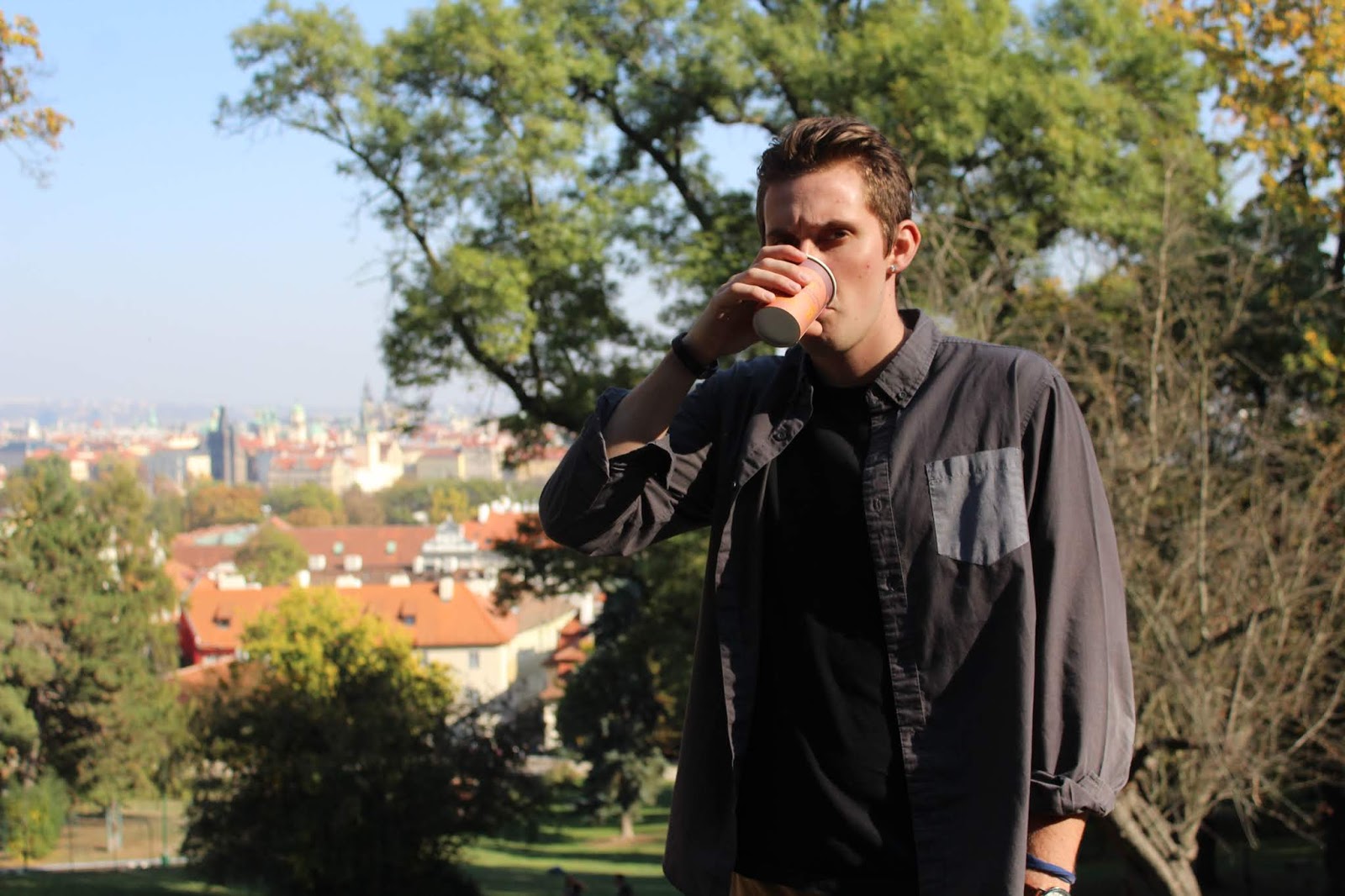 There are also a few small bars and cafes along the paths up the hill which have small terraces, making for a perfect place to rest and enjoy a drink with a view. Almost too cliche I’m sure, but it is a shared love of the quintessential tourist in Prague, so why not. 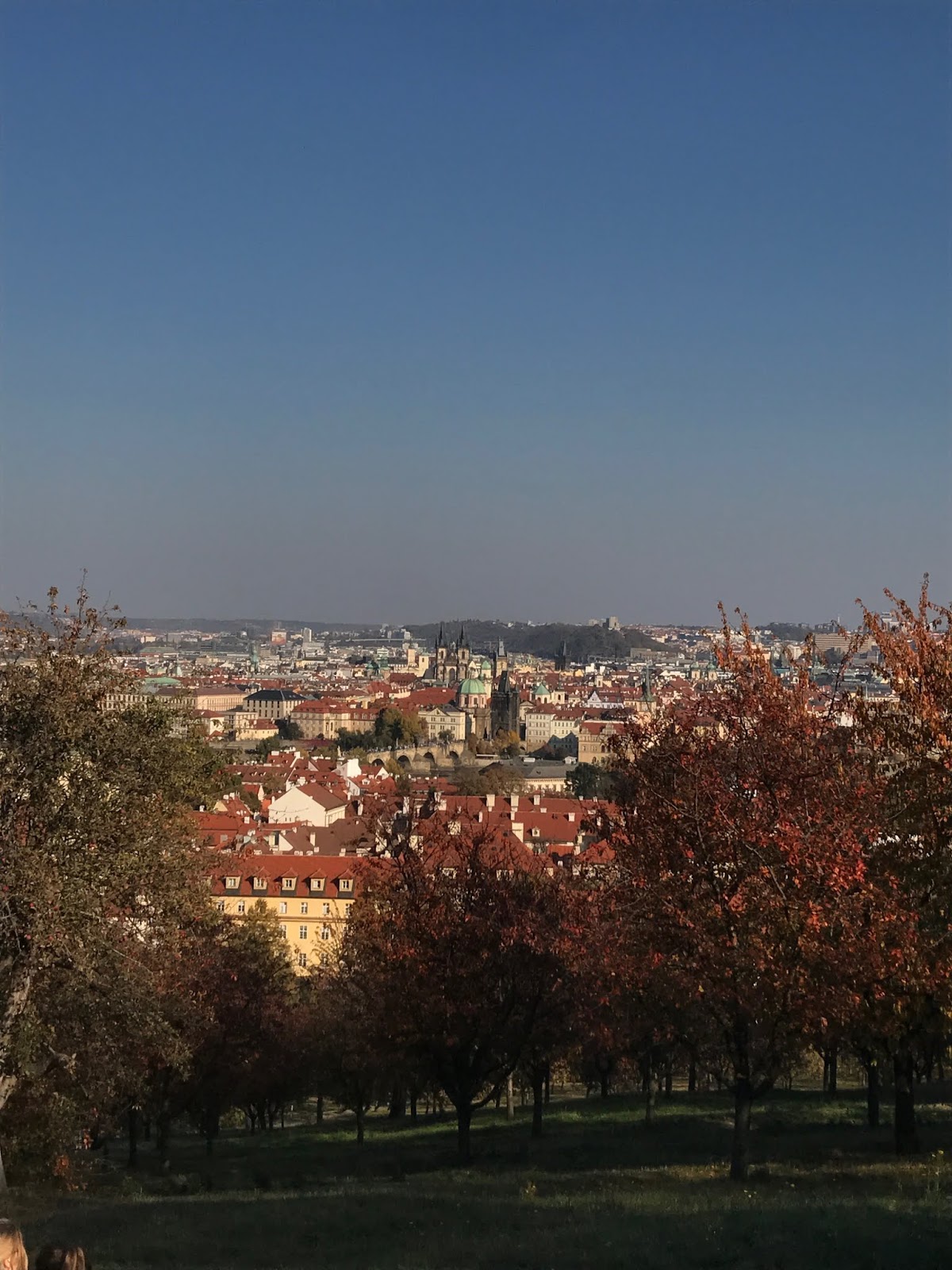 Lesser Town hosts the Prague Castle which is super accessible by foot when following the streets up towards the entrance. It really is a scenic walk to the castle because the street slopes upward and you take stairs to the top towards the square. I recommend taking Thunovska Street to the Castle entrance where you will find the square with 'Tomas Garrigue Masaryk'. When you get to the top of those stairs just turn around and let me know what you think.

It's best to walk through the castle towards the Bazilika grounds because the exit on the east side where the 'Garden on the Ramparts' resides has a panoramic shot of Prague waiting for you. The Castle won’t take you much time, it will be a smooth walk through the area taking no more than two hours. The architecture of the Bazilikas is breathtaking almost to a level of confusion. How can something that intricate have been built so long ago? Makes me wonder, makes me smile too. 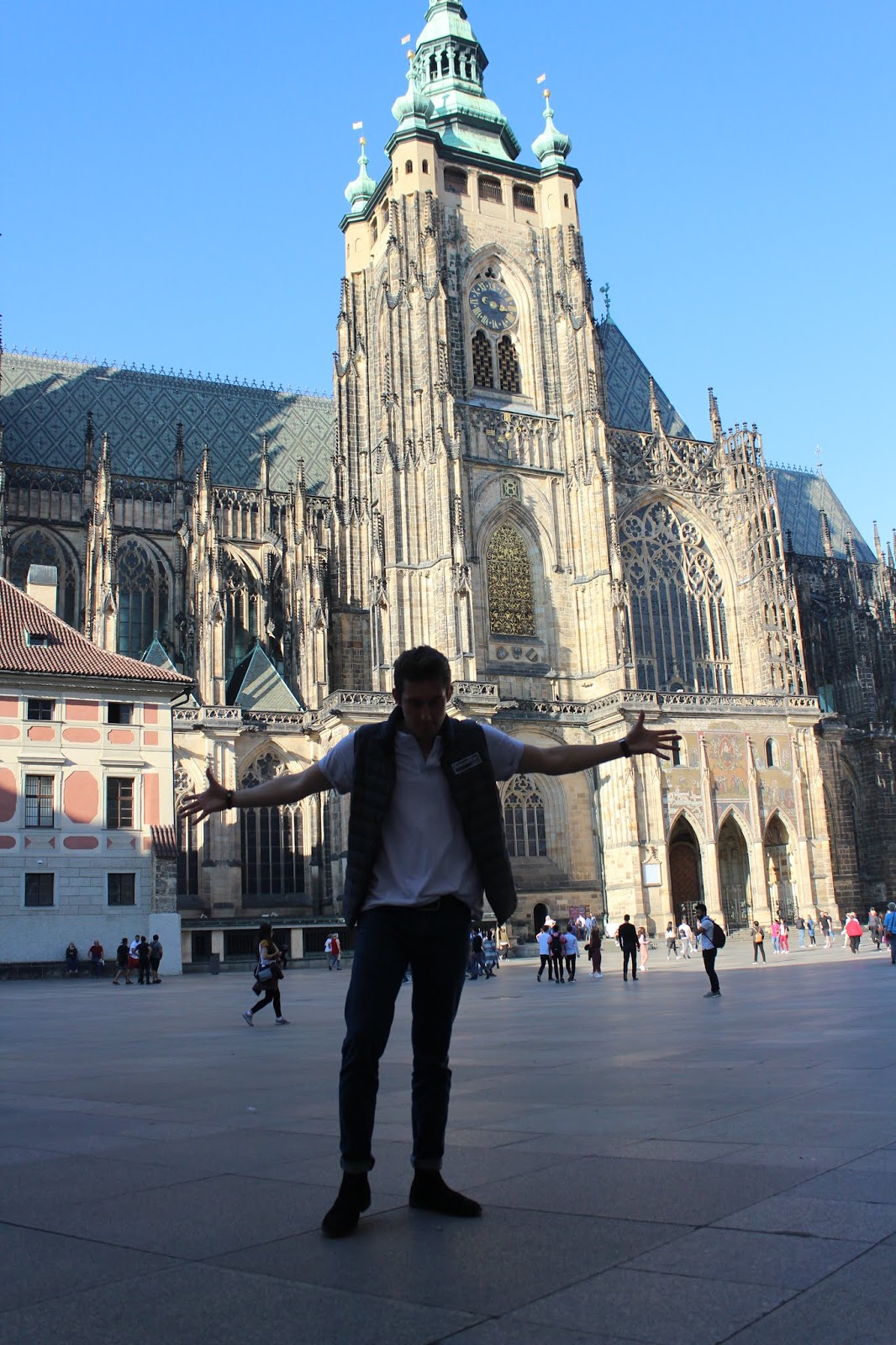 Prague consists of a great night life too, full of upscale restaurants, smaller bars pubs that are located right on the river by Charles Bridge, and even night clubs right in the heart of the city's culture. The city lights at night are gorgeous; Charles Bridge and the surrounding edifices become dressed in an orange glow that bounces off the water. I recommend a drink at Restaurant Lavka as it's right on the river's edge and the bridge sits before you. Casual restaurant to enjoy the end of your evening. I hope you enjoy Prague just as much as I do.

Thank you Daniel for the advice before traveling too!

Prague Restaurants:
Havlickova Restaurant. This is Czech cuisine as well as other european foods and it is amazing. It's not too crowded and has nice service.
Gruzie Restaurant- Georgian Cuisine. Incredibly good. Highly recommended.